“Officers and Crew of the USS Daniel Inouye – Man our ship and bring her to life!” With that command, 11-year old Maggie Inouye called the 300+ crew members to (literally) run from the pier, up the “Go for Broke” emblazoned brows fore and aft, and to man the rails of the majestic USS DANIEL INOUYE (DDG 118), the U.S. Navy’s newest warship. 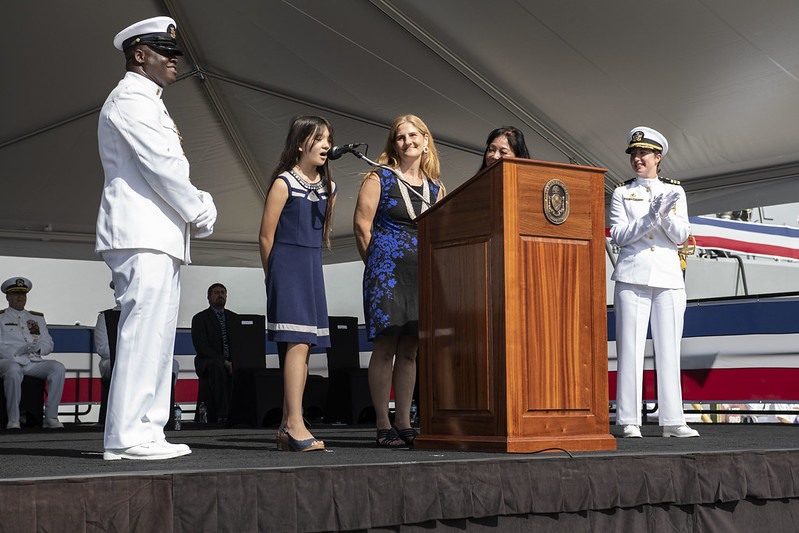 It had been over two years since we had gathered in Bath, Maine to watch our Founding President, Irene Hirano Inouye, smash a bottle of champagne against the ship’s lei-draped bow (and, yes, that was a HUGE lei at 75 feet). Irene took such delight in being invited by the Secretary of the Navy to serve as a ship’s sponsor, and even more so when the Navy asked her to sponsor the Senator’s namesake ship. As a ship sponsor, Irene bestowed good luck and protection over the vessel and all that sail aboard. She embraced the opportunity to ensure that the ship reflected the history and values of her late husband. Irene designated Jennifer Goto Sabas, who served as the Senator’s Chief of Staff and Jessica Carroll Inouye, the Senator’s daughter-in-law as Matrons of Honor; Maggie Inouye, the Senator’s granddaughter, became the Maid of Honor. Together they carried on the spirit of Irene’s sponsorship. 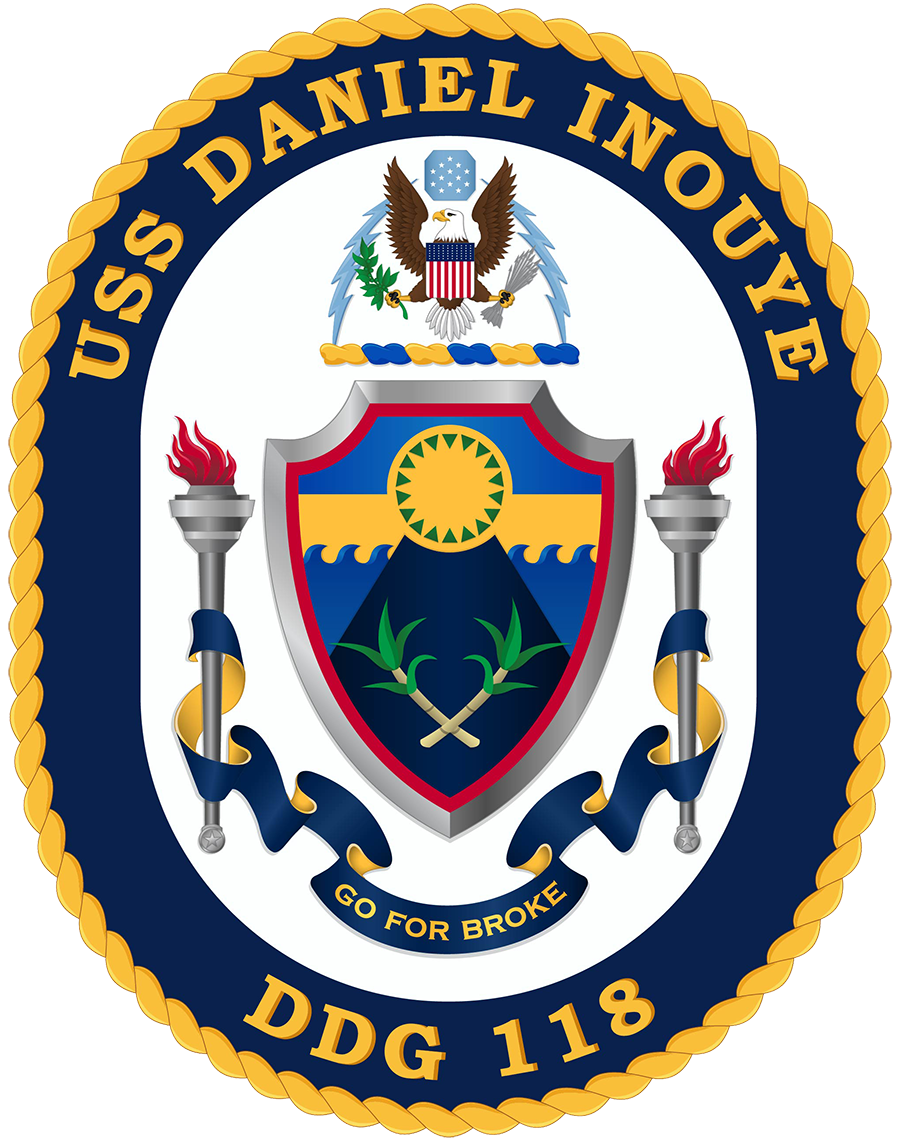 Irene ensured from the very start that key elements of the Senator’s journey were incorporated into the ship and its culture. The family designed a ship’s crest  that incorporates references to Hawaii’s land and indigenous people, the Inouye family’s work on sugar cane fields, Japanese ancestry, his Medal of Honor heroism in the Army’s 442nd infantry regiment, and his Senate service. In a mast stepping ceremony, Irene placed relics of his ancestry and service that will stay in the ship’s structure the length of its service. In that spirit, the ship is filled with art, artifacts, and placards that tell his story to crews for decades to come. Moreover, the sponsors ensured that the spirit of aloha welcomed the crew’s arrival in the homeport of Pearl Harbor.

The ceremony took place on December 8th, just one day following the 80th anniversary of the Japanese Imperial Navy’s attack on Pearl Harbor. The Senator’s son, Ken, “talked story” about many of the wonders of the intersections between Japan and the United States, for the Inouye Family and for our nations. That the grandson of a Japanese immigrant working in sugar cane fields would go on to be classified as an “enemy alien ,” sacrifice so much to defend this country in war and go on to strengthen its democracy as a Senator, reaching the rank of President Pro Tempore, is a unique “only in America” story, Ken reminded us.

The USS DANIEL INOUYE is an Arleigh Burke-class guided-missile destroyer and is a mighty warship bristling with modern systems and weaponry. I remember touring the first vessel of this class thirty years ago when I was a newly commissioned Navy officer. Back then, however, women were not able to serve on such a combat-ready warship. All the sweeter to see the USS DANIEL INOUYE under the command of Commander DonAnn Gilmore. I know Irene was also delighted that such a capable and strong woman leader was chosen to be the ship’s first commanding officer.

It’s also fitting that Senator Inouye’s story is now connected to that of Admiral Arleigh Burke, for whom the class of destroyers is named. His transformation from battling the Japanese in WWII to helping launch the Japanese Maritime Self Defense Forces is a classic example of the power of people-to-people ties. When Burke died, and despite the many medals bestowed on him, the only decoration in his coffin was the Grand Cordon of the Order of the Rising Sun, first class. (Read more about his Japan journey in this review of Board of Councilor Naoyuki Agawa’s book here.)

Once in commission, the commanding officer and crew are entrusted with the privilege and responsibility of maintaining their ship’s readiness in peace and conducting successful combat operations at sea in a time of war. As I watched the crew set its first watch, and as hundreds of diverse young Americans raced to bring the ship to life, I was reminded to be grateful for the 1.5 million active duty military men and women around the world, putting their lives at risk to defend our nation, protect Japan and other allies, and preserve our way of life.

We were reminded that the USS DANIEL INOUYE carries not just America’s warriors, but also America’s value. Thanks to Irene, Jennifer, Jessica, and Commander Gilmore, those values reflect not just the best of America, but also the best of its great namesake, Daniel K. Inouye.